Wordless on a Thursday 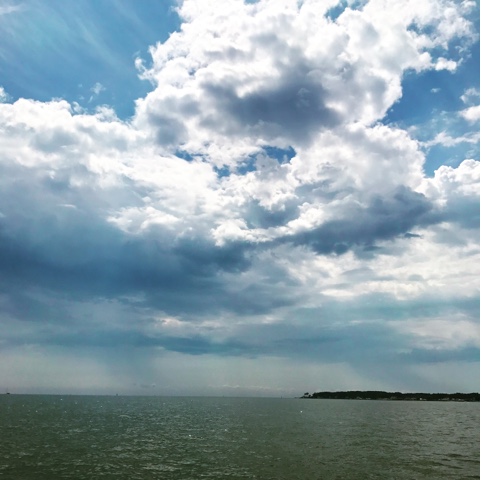 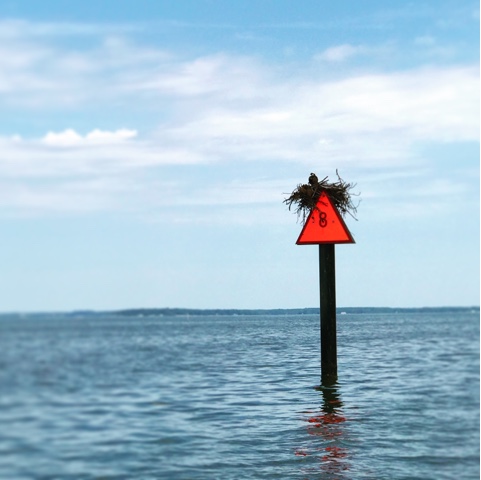 Now that the house has been saved, it's time for some long overdue projects.
The yard has always been a problem.
Grass rarely grew there under the shade of all the trees.
Now that we've lost most of the trees,
we finally have some grass growing.
However, there is a lot of erosion because of the lack of those trees.
It's just a never ending problem. 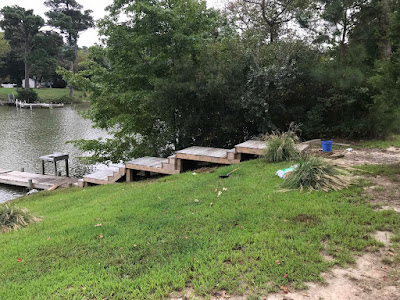 So, for our first project, my mom and I purchased some ornamental grasses
to plant along side the relatively new steps down to the pier.
The steps help slow the flow of water,
and the grasses should help with additional erosion in the area once established. 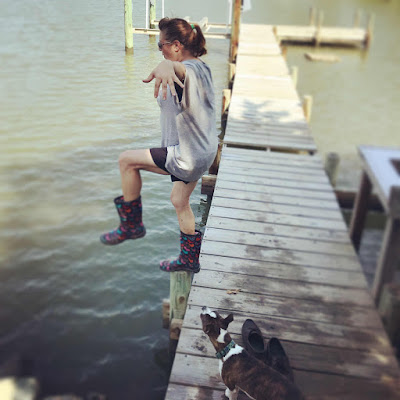 It wasn't all work, there was some goofing off.
Here I was channeling my inner Karate Kid.
I did this once when I was much younger on the taller pilings on the end of the pier.
I'm older and not as agile now.
I mean, even my dog Lucy was a little concerned. 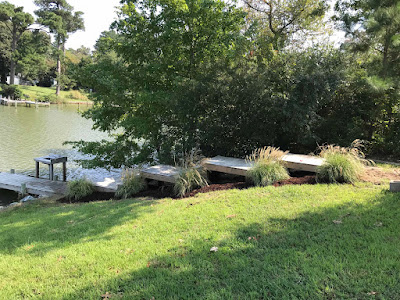 The planting went a lot quicker and easier than we expected.
We got all 5 plants in the ground, put landscape fabric down,
purchased mulch, ate lunch
and mulched in just a couple of hours. 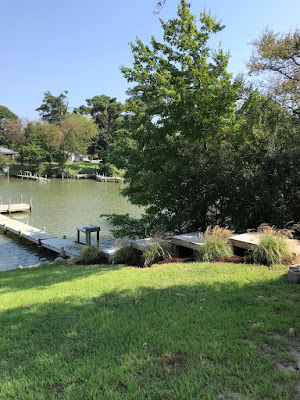 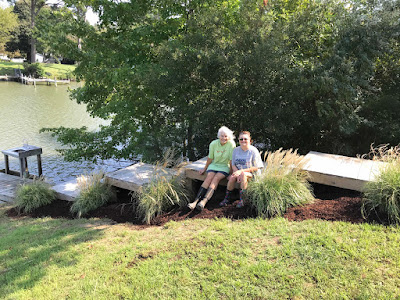 We were very pleased with the end result.
The grasses softened the steps,
and the mulch really polished it up.
Later we went out and purchased some solar lights to place in between the plants
and it really finished off the project perfectly.
Unfortunately, I couldn't get a decent evening shot of the light.
There are some other outdoorsy projects we need to get to.
We have a plan for fixing some eroded areas
that include grass seed and a firepit. 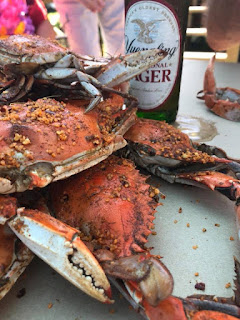 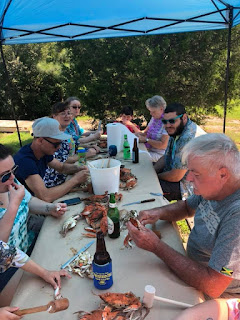 We had family travel from several states to be there.
Some hadn't been to the house in several years. 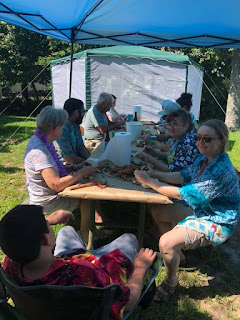 Some go every year
and some live there now. 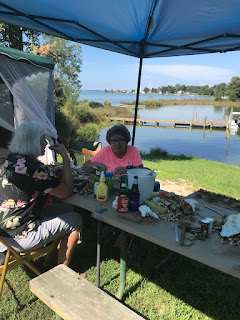 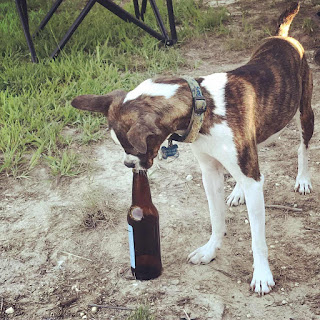 Even the dogs partied. 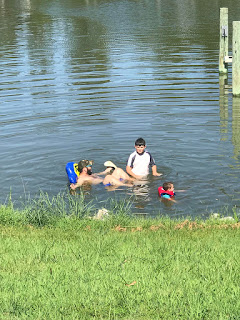 The kids all jumped in the creek
and stayed there until dark
when I warned them that sharks feed at dusk. 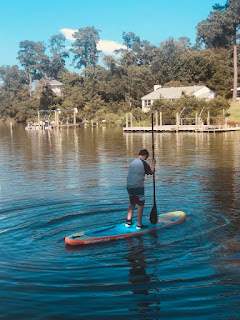 Our cousins who live down the road brought over their paddleboard
that the kids got to try out.
Hard to believe this kid on the paddleboard
was terrified of the water just a couple of years ago. 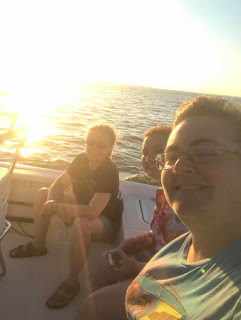 And there were some boat rides for the older kids.
All in all, it was a great weekend.
There was much discussion about family history and genealogy
and about returning soon to check out some of our ancestral property.
Looking forward to spending a lot more time in Deltaville.
Posted by Jamie at 10:07 AM No comments: 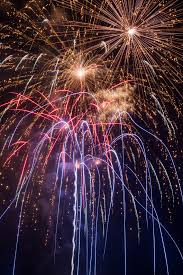 While at the house in Deltaville cleaning up and preparing for our party, I came across some fireworks that have been around for quite some time.  These particular explosives were a birthday present to one of my kids (seriously, why didn't I ever receive explosives as a gift??).  So the question was, do bottle rockets go bad?
I looked this up on the handy dandy internet and in short, no, there is no expiration date on fireworks.  However, there is a chance the humidity could make them a tad unstable.  So, we're going to get my dad the retired firefighter to set them off and see what happens.
Can't be worse than nearly blowing up a sailboat, or having a mortar fly straight for the audience, or have a firework fall and shoot inches from the truck hood.  I'm not admitting that happened before, just that those scenarios could be worse.

Bring on the explosives!
Posted by Jamie at 7:42 AM No comments: 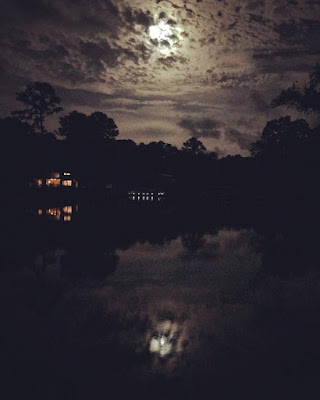 This weekend marked the first time I've been back to Deltaville in a year.  In my last post, I explained the family drama/crisis that had been going on since October last year.  Because of it, I refused to spend time at the house on the creek for fear it was going to be taken away.  Thankfully, the crisis has been resolved in our favor, the house is safe, I've headed back and there's going to be a big ass party next weekend. It seemed fitting that this return to Deltaville was heralded with a special full moon.  August's full moon is known as the Sturgeon Moon because the sturgeon fish is more easily caught in August and early September than other months according to the Almanac.  It was especially fitting that the full Sturgeon Moon rose this Saturday night over my much loved Sturgeon Creek. I took it as an omen of good things to come.

Stay tuned for an update on the ginormous celebration this coming weekend, and for more posts about Deltaville in general. 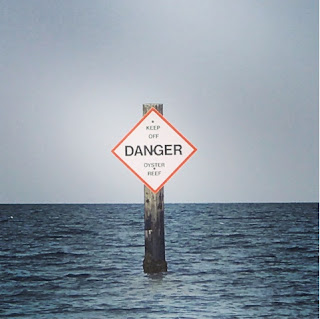 They say blood is thicker than water. It's a simple proverb that says the loyalties and relationships within a family are stronger than anything else.

I'm here to tell you how sometimes water is thicker.

It's been a while since I've blogged here.  September 28, 2017 is in fact my last post where I said I was going to get back into regular blogging about Deltaville.  Shortly after, the unthinkable happened.

Many know the deep seated love I have for our small piece of property in Middlesex County, VA.  If you've been a regular follower of this blog, you may have heard mention of family history stories that go back to the time of the Civil War- or the War of Northern Aggression as my late great-great-grandmother Sissy used to say.  The truth is that the property has been in the family since 1650.  That's 368 years.  368 years of family history on one piece of land.  In the course of those 368 years, the property was passed down and divided up and passed down generation after generation until it became the parcels that it is today.  And one of those small slices of the original property belonged to my grandparents and upon their death went to my father and his 2 sisters. 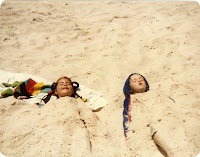 All my life I have been going to Deltaville.  With the exception of a few trips to Disney World, some camping trips and my honeymoon, all of my vacations have been to Deltaville.  Nearly every Memorial Day weekend, 4th of July, Labor Day weekend, week long vacations and regular weekend getaways were made to the small house on Sturgeon Creek. Growing up, my cousin and I would spend weeks at a time there together.  And with our great-Uncle next door, more cousins usually showed up during he course of our visit.  We played epic games of capture the flag, helped haul fishing nets and crab pots, went on secret midnight prank adventures and spent time boating and swimming.  It was and idyllic place and a perfect childhood of camaraderie and adventure. 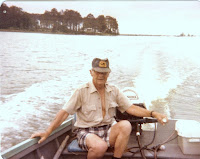 And there was Pepop.  (you can read a post about him here).

Really no words can come close to explaining how much Deltaville means to me.  It holds some of my happiest memories as a child, as a parent and as a grandparent.  I have always felt a contentment here that I have not felt anywhere else.  Even in those times where life was rough or uncertain or just plain ugly and vicious, Deltaville was always there to soothe.  Like the sacred Ganges River of India, the waters of the Rappahannock River and Sturgeon Creek healed. 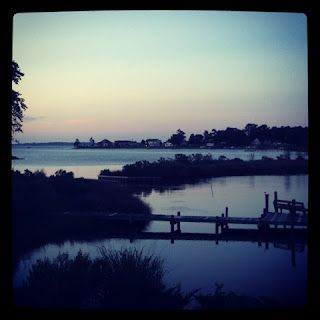 There was an understanding from a young age that Deltaville would always be a part of our family.  I can remember my grandmother explaining that as each person passed away, the house would be inherited by the children so that it would never leave the family. It's easy to think that's how things will go.

You trust your family to keep something so important, so ancient, so sacred- protected.

So not long after my last post at the end of September last year, the unthinkable happened.  One of my father's sisters passed away unexpectedly.  In the aftermath, my father said something I thought I would never hear, "Deltaville might have to be sold."

I can say that in that moment one of my worst fears was realized, and I went tail spinning into a depression unlike any other I have experienced.  Still, there was hope that it wasn't a possibility.  After all, my grandmother always said it was to be passed to each generation never to be sold.  I held onto that belief.

The 1/3 share that was owned by my father's late sister was inherited by her husband and daughter equally.  And to make a long and upsetting story shorter- they wanted a buy out.  That seems simple enough.  The house gets appraised and you offer the person an exact third of the appraisal and everyone is happy.  Except people are greedy and vengeful, and they hold something you love hostage while they extort money from you.  Because that's what family did here.  That's what blood did.  The blood that is supposed to value the family relationship above all else.  Threats were made to petition the court to have the property sold at auction.  It seemed bleak. I refused to go down there. We all just held our breath and waited.

Death is an awful thing for the living.  It seems to bring out the worst in some.  It feeds the darkest parts of a person, creating a monster that can do nothing but bring about pain and anguish to the already grieving.  I'm certain there's a special place in hell for that sort of monster- a spot that lets them fester and rot alone.

On the opposite side of that coin, in situations like this you learn who really is blood.  Sometimes it's actual family and sometimes it's just friends you've made there over the years.  People who do what they can to help and offer assistance.  This town has some really damn good people.

It's with a massive amount of relief and happiness that I can report as of this past Friday,

the house is safe.
Because when there's 368 years of history and untold happy memories, you do what you must to protect it. 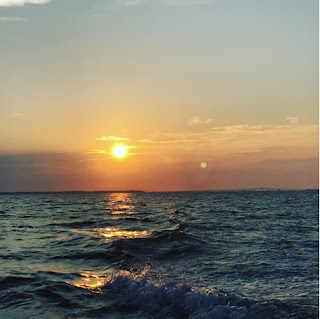 As for blood being thicker than water,
the waters of the Rappahannock River and Sturgeon Creek proved to be far thicker than blood.

Give this a listen.  I particularly relate to the line:
"I've been searching for something, taken out of my soul, something I'd never lose, something somebody stole"
Thank God they didn't get away with it.
Posted by Jamie at 7:37 AM 2 comments:

It's been a long time since I've posted on this particular blog.
These photos are from our return trip home. 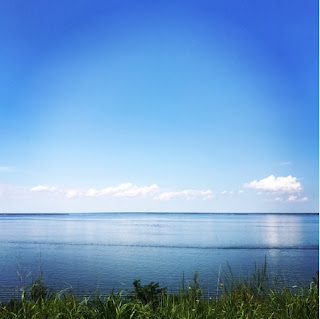 Big E and I opted to go through the less congested areas
when we headed home after the 4th of July weekend.
We enjoy checking out state parks and looking for new places to camp.
This stop was at Westmoreland State Park on the Potomac.
We've stopped here before. 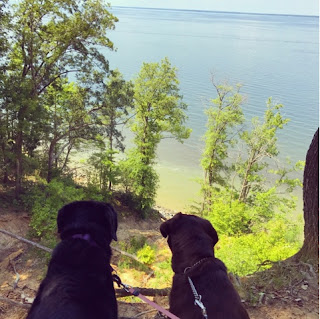 The dogs enjoyed the short hike,
though it was pretty hot out.
Bailey (on the right) is definitely trying to figure out
how she can get down the steep ravine and get to the water.
I'm hoping this is the start of more regular blogging here.
Life gets busy sometimes,
and we develop other interests.
I've been backpacking and blogging about that here
as well as working on a historical home and blogging about that here.
Stay tuned!