A Ghost Story or Two

Those who know me know that I have an obsession with a keen interest in the paranormal.  And most know that I've had this interest since birth childhood.   So where did this interest spark from?  My crazy weird strange loving family.  My aunt could spin a scary tale in seconds flat.  Some were true stories, most were not and sometimes it was hard to know which was which. (I do realize that there are not small furry creatures called gretchens living in the rip rap with red eyes and fangs who eat girls with dark brown or blonde hair).  But there are a couple of stories told to me as a child by by step-great-great grandmother that I remember to this day and know that they were true accounts of things she experienced.  And they scared the poop crap pee jeepers out of me.

Grandma Sissy was 104 when she died and a wealth of interesting information. Can you imagine she actually used a real slate board for school?? But this post isn't about the amazing life of Sissy Jackson, it's about a couple of amazingly spooky stories she shared with me (I'm sure I'll blog about her amazing life in the future). 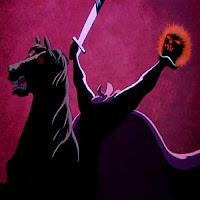 The first experience she told me about involved a Headless Man.  He didn't have a horse, sword or flaming pumpkin like the photo, but he was without a head.  Sissy said that one night, she had a friend over her house.  This friend lived just across the street so when it was time for her to leave, Sissy walked her friend back home.  It was dark back then (it's dark in Deltaville now, but we're talking early 1910's) and Sissy was walking along looking down at the ground so she wouldn't trip over anything.  All of a sudden, she sees the legs and shoes of a man and when she looks up to see who it is, she realizes the man has no head.  She screamed and ran the rest of the way to her house where she told her family what she had just witnessed.  A man dressed in a suit who was missing his head.  What is interesting to note is that about 10 minutes later, her brother ran into the house claiming he saw a man without a head too... did he witness the same person? Or was he the same person messing with his younger sister?  All I know is, I had to sleep with the light on for several nights and was afraid to go for a walk at night for fear I would see the headless man.  And I was sure that he had a horse somewhere that he could use to run me down with. 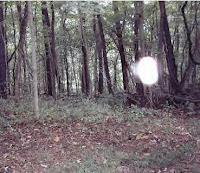 The other story took place more recently.  By more recently, I mean when Sissy was older, so most likely in the later 1980's-1990's but that's a guess.  At the time of this experience, Grandma Sissy was living in her blue and white trailer at the entrance of our little "development" called Jackson Acres.  She was living alone, and one night when she went to bed, she closed all the thick heavy drapes, turned out the lights and climbed under the covers.  She said that the room was totally dark, not a stitch of light to be seen.  All of a sudden, she saw a bright orb of light on her drapes.  It was similar to a light from a flashlight, but there was no one else in the room and the drapes were pulled tight.  She watched it while it moved around the room before ending up on the covers next to her.  She jerked up and told it to get off of the bed.  It responded by moving to the floor.  "You stay down there," she told it sternly (and she could be stern).  It was gone by the morning.

There are many spooky tales from the Tidewater Area.  L.B. Taylor has produced a number of books chronicling the supernatural in the state of Virginia.  Deltaville has a few haunted locations and Mathews, VA is home to one of the creepiest places I've been to- Old House Woods.  Have a ghost story to share?  Want to check out paranormal investigations in the Deltaville area?  Check out my website Gettysburg Ghosts or the Ghost Blog
Posted by Jamie at 12:50 PM No comments:

This week, my grandmother, Pauline Jackson will be passing away.  She has been suffering with many ailments for several years now and was given a year to live about 3 years ago.  Sadly, she is now in hospice care, and while she has surpassed their 7-10 day estimation (we are on day 13 and hospice is flabbergasted, I'm not as I know she's much too ornery and bullheaded to go when they say she should) it will most likely happen this week.

But I don't want to dwell on that too much.  I'd rather share the things I remember about her.

My grandmother and grandfather lived in Deltaville when I was young, right up until my grandfather became ill with heart troubles (these heart problems took him when I was around 4-5 years old).  When they moved back to Maryland, they moved in with my parents and I.  I had my grandmother to myself until my sister showed up when I was 7.  When my brother came along, my dad built an addition to the upstairs of our house.  A bedroom and bathroom was added, and as the oldest, I had the privilege of getting the new bedroom.  My grandmother's room was upstairs as well, and she used to joke about how we were roomies.  I spent a lot of time hanging out in her room watching her small 13" black and white TV, mostly when there was a show I wanted to watch that my dad said  I couldn't, like Piranha (I know I should have listened as I worried those freshwater fish could possibly come up through the toilet and bite my butt.  Or worse, come out of the faucet during my bath, but I digress). 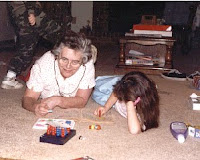 Growing up, Grandmother spent a lot of time with me and all her grandkids.  We were all special to her.  She would read to me whenever I wanted her too, even the dinosaur books, though she hated having to say the names.  I remember watching Dallas with her and my mother, and The Waltons.  And every Friday night when my mom had to work late at the bank, my dad, grandmother and I would have liver for dinner and watch Archie Bunker.  Those were the days.

She taught me how to cut the grass.  She was rather particular about how the grass was cut.  You had to get the mower up close to things to minimize the need for trimming later.  And it drove her crazy if the neighbor cut too far over onto her yard or if someone let their dog use the yard as their bathroom.  Those lessons stuck.  I prefer to cut the grass myself because no one else does it right, I got angry with my neighbor for cutting into my yard (in my defense it looked awful and it happened because he was using a riding mower on a lawn it only takes 30 minutes to cut with a push mower) and I never, ever let my dog walk on someone else's lawn while out for a walk.  And speaking of grass cutting, she is the only one in the world I know of tough enough to cut the grass in her bare feet using a push mower.  And I'm not talking about cutting a nice thick plush lawn, I'm talking about the scraggly stick strewn lawn in Deltaville with its pine cones and rocks.  I don't even run out to the car in my bare feet there.

She enjoyed being outside and working in the garden/yard.  When I would visit each week, we would go to Frank's Nursery to look at the plants and gardening supplies.  Every time she'd say she didn't need a cart.  And every time I would have to go back and get one because we would each manage to find many things we probably didn't need.  Afterwards, we would go to lunch sometimes McDonald's, sometimes Applebee's (depending on how much we had purchased).  And once, after leaving McDonald's, we passed a homeless guy standing on the road with a sign about working for food.  She had me go back to the drive thru and bought the man a Big Mac Meal.

She was an avid reader of The Enquirer and The Star, also known as her "dirty books".  Everyone joked about how ridiculous they were, but everyone read them whenever they visited.  She kept all her old ones for just that reason.  She was an avid reader in general, and we often shared and swapped books each week.

She tolerated a lot from us grandkids.  Kelly and I were quite the pranksters and hid her dirty books.  She threatened us, but we knew it was empty.  She tolerated us building a snail house in the kitchen sink (side note: periwinkles don't stay in the kitchen sink.  We found several periwinkle shells many years later when we were cleaning out the kitchen cabinets).  We used her lipstick and her perfume to adorn love notes, we also used her perfume and other various beauty products to concoct our own "potions".  We cut up a pair of her pantyhose to use as masks during a midnight covert operation.  I could go on, but you get the idea. 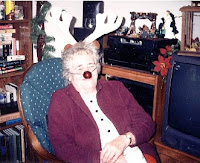 Grandmother was a fun person.  She didn't always come across that way, but she could have a good time.  One year we went Christmas shopping and I look up to find her dancing around the Imaginarium store wearing red reindeer antlers and singing along to the carol playing on the store's sound system.  And a few years later she wore antlers and a red blinking nose while helping me decorate my tree.  And I can't even begin to count the number of times she tried to marry off Kelly and I.  Our cousin Dawn was luckily already married, but Kelly and I were fair game.  She'd show any attractive guy our pictures, sometimes while I was standing right there.  I will say that while it was mortally embarrassing to have your grandmother trying to hook you up with someone, at least she had good taste and most guys were attractive.

She was a best friend.  Growing up I told her everything.  I shared secrets, I shared joys and I shared pains.  When we moved out of her house when I was 13, I begged to be able to stay and live with her.  When I lived in North Carolina and had little contact with my family, I talked to Grandmother every day on the phone.  When I moved back to Maryland, I would drive the hour to her house every week to cut her grass.
She was my constant. 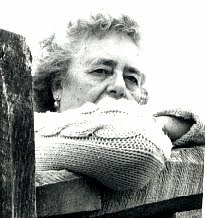 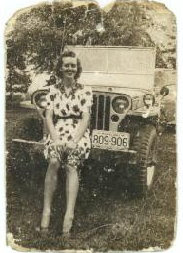 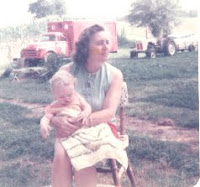 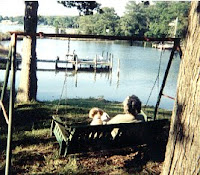 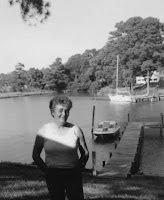 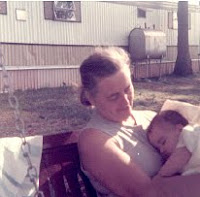