So what does love have to do with a blog about Deltaville?  Perhaps the fact that I love this town, or that I loved the family members that lived there or that being there and being stress free and relaxed lets me love more and easier?

Love can be a real royal pain in the nether regions of your anatomy.  You can make some really stupid decisions because of love or because of what you think is love at one time but sadly find out it was simply indigestion wasn't later on.  You throw lust in there, rebounding relationships... it just gets very messy and hard and complicated and typically this happens at such a sneaky, rapid pace it's changed before you know it and you're stuck.  Not that I'm speaking from any type of experience at all mind you.  So despite that rather cynical twisted view, I am a romantic at heart, though more aptly- a tragic one.  I still think you can get wine, roses and dancing to the radio in the kitchen while making dinner.  I read about is all the time in books.  It must have happened somewhere at sometime for someone to be able to think of it and use it in a literary sense.

So what's sweeter and more romantic than a first crush/love/infatuation?

It was the summer when I was 11 or 12.  My first introduction was made on the way back in from pulling the crabpots.  Even at 11 you don't want cute boys seeing you with your hair messed up and smelling of dead rotten fish but aboard Pepop's boat Pigpen there wasn't much room to freshen up.  We docked briefly at the community pier to say hello to one of Pepop's friends and share information about the day's haul.  I can't really tell you what exactly was said because I was hearing angels singing the Hallelujah chorus as I stared at the most gorgeous guy I had ever seen.  Craig.  (I won't use last names because frankly I would be mortified if he ever stumbled upon this and read it or something).  Craig was the grandson of one of the residents on Sturgeon Creek.  I think I nodded at our introduction though to be completely honest, I might have been standing with a gaping mouth and mass quantities of drool running down my chin right before my face changed into a cartoon wolf's head and I yelled "arrrroooooogaaahhhh" (give me a break, cartoons were my only frame of reference at the time... ok and still are basically).

We'll skip a few weeks ahead to the vacation I took with my cousin Kelly.  In the weeks prior to the trip, I had spent many a phone call filling her in on the hunk living on the Point. I'm pretty sure I probably got in trouble for the phone bill (at some point my mom insituted the timed phone call... but I'd turn back the timer a minute here and there....) Anyway, back in Deltaville, Kelly and I managed to catch a glimpse of Craig, which wasn't hard to do since we spent every waking moment stalking his grandfather's house took a lot of walks around the point.  We decided we needed to write him a letter to request a meeting.  We thought it through, decided to ask him to meet us at the community pier around 1pm, wrote it neatly and tried to figure out how exactly to deliver it.  We ended up asking Mrs. W (Craig's neighbor) to deliver the letter.

The next day brought gorgeous weather which was perfect for our outdoor meeting.  We put on clean nice clothes  and actually requested to have our hair brushed.  We made it to the pier early and saw Mrs. W checking her crab pots.  Being nice girls we smiled and chatted with her for a minute before going to sit at the end of the dock.  Mrs. W wasn't leaving.  Instead she checked her crabpot again and stayed until Craig showed up.  And he brought a girl.  It was a crushing blow.  Not only was the whole thing chaperoned unexpectedly but another female was present.  We were not part of the main conversation, but had our own conversation under our breath... how nice it would be to shove the girl off the pier and ruin her nice white OP shorts, how it was gross she had mustard and bread stuck in her braces (she was eating a sandwich).  We made some excuse and went home.

We were down but not out.  No, we decided to up the game a bit.  So we wrote another letter insisting he must come alone and set up another meeting.  To up the ante a bit I donned Grandmother's Azalea pink lipstick and kissed the bottom of the page.  We also used a small amount of her perfume (Elizabeth Taylor's Poison) to make it smell nice.  I think the affect was more a pink jelly fish looking smudge that smelled like a Texas whorehouse.  Perfect.

Of course the delivery of the letter required more thought.  We couldn't use Mrs. W again (the traitor) so we had to figure out a way to deliver it ourselves.  My aunt walked with us one evening and there in Craig's grandfather's backyard working on his van was Craig's older brother.  Aunt Patsy suggested we walk over and ask him to deliver the note to his brother.  She claimed it would make us look more mature (believe me, we still don't look mature...).  So we gathered up the courage and did just that.  And ran giggling back up to the road- so much for mature.

The meeting happened the next day and went more the way we wanted it too.  He was there and waiting, we had a great conversation.  I remember he talked about eating Wheaties.  And seriously, that's all I remember about it.  That and I spent the rest of the summer listening to Lionel Richie's "Hello" and thinking about Craig.  We never saw him much after that.  I think I was 16 the next time I really saw him.  Funny, he was more interested then, but I had moved on.  But you never forget those first summer romances, or the invaluable lessons on stalking how to get a guy to notice you.
Posted by Jamie at 7:20 PM 2 comments:

The grass is growing, birds are singing and the bats are swinging- it's baseball season!  But, like many people feel these days, the major league teams don't have much to offer me these days.  Once I was a die hard O's fan, then Cal Ripkin, Jr. retired, Brady Anderson left, BJ Surhoff was traded and the coup de gras- Rafeal Palmero swearing he had never used performance enhancing drugs and then testing positive for them.  Talk about let down.
So where do you go to watch baseball the Good Ole American way?  You go to the Deltaville Ballpark. 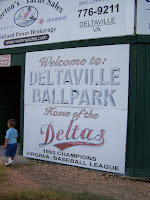 Is there any simpler name than the Deltaville Ballpark?  Short and to the point, with no advertising for a bank or telephone company- simply named for the town it's in.  And when was the last time you can remember paying $5 to see a baseball game?  And get a hot dog and drink for under $5 (I think $5 gets you half a drink at a major league stadium).
And then there is the history of the stadium itself.  It was built in 1948, and I've been told my very own great grandfather helped with the construction.  The grandstands hold approximately 500 fans with the home crowd sitting along the 3rd base line or home plate.  Fans are protected from foul balls by crab pot wire as it is abundantly available in the area. And if you happen to retrieve a foul ball, it can be turned in to the concession stand for a $0.50 reward.  An interesting bit of information- there are a pair of nesting osprey on one of the outfield lights who sometimes leave dead fish carcasses for the outfielders to find.  Niiiice. 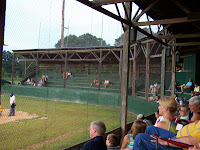 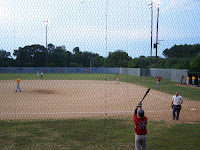 As far as the team, the Deltaville Deltas are a member of the Southern Virginia Baseball League and predate the ballpark.  I heard somewhere that the name Deltas came about because Deltaville didn't fit on the jersey, I can't remember where I read that but it sounds good.  They are a semi-pro team and according to my 15 year old daughter, there are several hotties on the team.
So next time you're feeling let down by all those grown up children making millions to play a game, head on over to Deltaville and enjoy the sport that way it's supposed to be enjoyed: with family, fans and affordably. 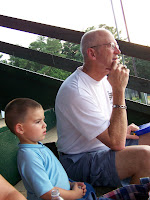 This is a shot of my son and a family friend enjoying the game.  My son said after I took this shot, "Hmm, this is a good basketball game" I have my work cut out for me...
Posted by Jamie at 2:16 PM 2 comments: