Today the sun is up, it's not too cold outside and I'm headed to a Home and Garden Show.  The onslaught of seed and flower magazines are filling up my mailbox, and yesterday I saw 5 Robins in the neighborhood for the first time this year.  Yes, spring is nearly here despite all the snow still sitting around my yard.

So, I thought I'd talk about Pepop's Vegetable Garden. 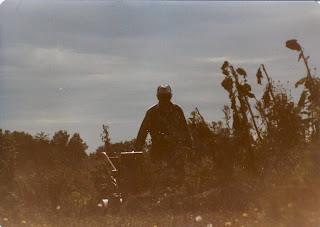 His garden was a thing of wonder.  I have tried to have a "thing of wonder" veggie garden, but it never works.  Granted, Deltaville has perfect soil while I have soil that you could make terra cotta pots out of.  Not to mention the rock ledge that runs through the backyard and prevents good drainage.  So I ripped out the veggie garden and plan to get a pool.

Anyway, Pepop had everything in his garden: strawberries, eggplant, corn, sunflowers, tomatoes, etc.  It made excellant hiding places during our games of capture the flag and hide and seek.  We all want the garden to be on our territory.  I think one of us made up a parody of Prince's "Purple Rain" about standing in Purple Corn.  We were obviously not songwriters young.

We used to find all sorts of wildlife in the garden like snakes, rabbits and turtles.  Not surprising as there was always wildlife around Pepop and his house.  He might have been a former Disney Princess or something (and I mean that in a manly, deep voice, used to be a park ranger way).


The most interesting thing about the garden, however, wasn't the plants it was the mulch.  He used crab shells to mulch the rows.  Just threw them down between the rows after the crabs had been picked clean.  Apparently they keep the weeds down and provide calcium to the soil when they eventually break down.  All I know is that I ended up with more cuts on my feet from running barefoot through the garden than I did in the water.... lucky I didn't end up with a nasty infection as a child. 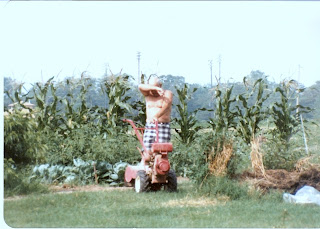 So, here's to spring, magical gardens, birds singing, robins and the glorious sun!  What signs of spring are you seeing?
Posted by Jamie at 8:04 AM 2 comments: