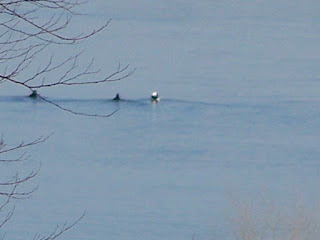 This is not a good photo, but it's the only one I managed to take of the Bufflehead Ducks in the creek.
It seemed whenever they were close enough to photograph,
my camera was not close enough to grab and my cell phone camera couldn't zoom in enough.
Once I thought to keep the camera close by, they never came back to our section of the creek.
Dumb Ducks. 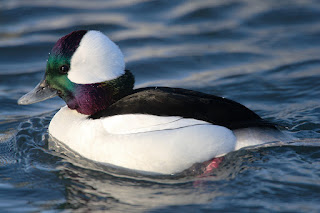 This is what a Bufflehead looks like if you manage to get a photo.
They spend the winter in bays and estuaries.
They feed by diving under the water.
I remember my grandparents talking about the "dipper ducks" as they called them.
My grandmother in particular would spend a lot of time watching them and laughing
at how they popped back up to the surface.
It's been a while since I've seen these ducks in Sturgeon Creek.
Glad they've popped back to the surface. 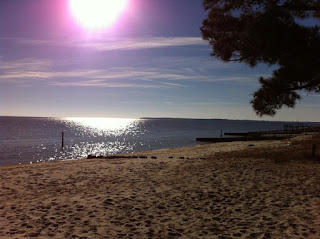 Don't underestimate the value of Doing Nothing, of just going along, listening to all the things you can't hear, and not bothering.
~Pooh's Little Instruction Book, inspired by A.A. Milne
Posted by Jamie at 10:22 AM 1 comment: 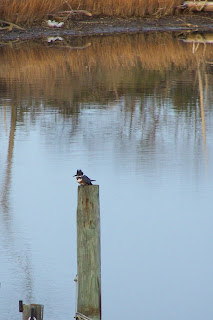 Sorry to interrupt the normally scheduled blog post, but I have some celebrating to do.
My football team is going to the Superbowl!

It was a crazy year for this team.
One of our defensive starters tore his achilles tendon in the offseason.
It required surgery.
Art Modell, the former owner and man responsible for bringing football back to Baltimore passed away in September.
Our player Torrey Smith suffered the loss of his brother.
Then one after another, the injuries piled up.
Most of our defensive line was injured at one point or another.
Members of our offensive line were injured.
Triceps, biceps, ankles, knees, chest, neck/spinal cord, consussions....
What started as a strong season seemed to be winding down with losses adding up.
We got into the playoffs because someone else lost.
It seemed as though we might not get past the forst playoff game.
Then, The General of the team Ray Lewis announced this would be his last season.
And he would be playing in the Playoffs after a triceps injury that kept him out of the game since October.
There was new fire.
Our injured guys were healed, the team had something to prove, and everyone wanted Ray to go as far as possible in the postseason.
Our first playoff game we were the underdogs.
We won.
Our second playoff game we were underdogs.
We won.
(And produced one of the best games I've ever watched in any sport).
Our third and final game for the AFC Championship we were underdogs.
We won.
So basically there's this to learn.
No matter what crap you have thrown at you.
No matter what adversities, personal losses, injuries or public opinions are forced on you.
You can persevere.

Trust me, this isn't what you're expecting, unless you ever saw the other blog post about A Dream.


I had a dream the other night.  I was having a sleepover at CBW's house with a couple of friends. 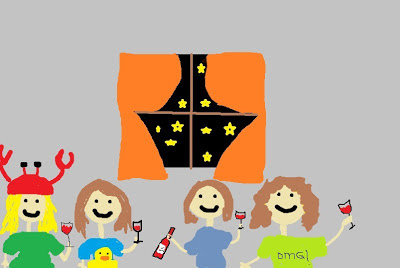 There was, of course wine involved. 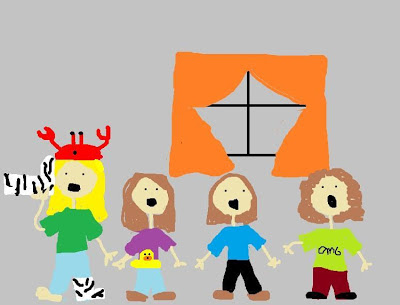 CBW's boot phone rings.
Okay, I admit to some creative editing.  It was a shoe phone, not a boot phone, but CBW mentioned these zebra print boots she has, and, well, I think they add a little something-something to the story.
Anyway, her boot phone rings because secretly, we're secret agents.
Like James Bond. 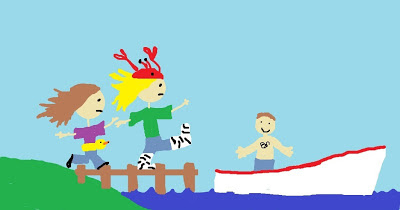 So we race to our boat.
(I'm not sure why CBW looks like she's doing a zombie walk.  I'm sure she doesn't really run like that)
It isn't a fancy boat, more like a crabbing boat you'd find down in the Tidewater region of Virginia.
The Captain of our boat was a prime specimen of man-flesh: Javier Bardem.
(I can't draw Javier, and I know the illustration looks like a Midget driving the boat,
but trust me, it was Javier) 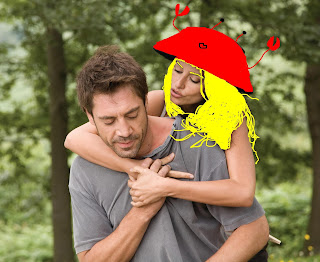 So we get in the boat and cruise out to see what the emergency is. 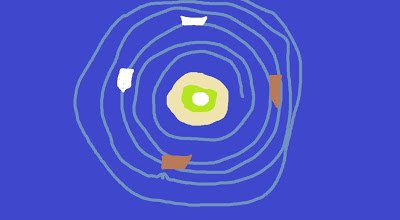 We find that a large whirlpool has developed around the island housing the lighthouse.
There were lots of boats trapped in the swirling waters.
That's when I noticed the lighthouse looked like this: 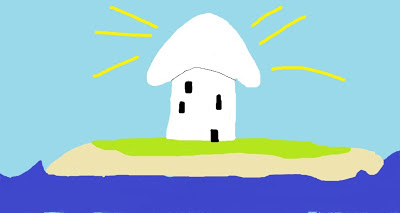 If you thought "mushroom" you'd be correct though "phallic symbol" also pops up.
Pun Intended.
So, basically, that's the end of my basically meaningless dream.
And a message to all of you not to eat cucumbers with Laughing Cow Garlic and Herb spreadable cheese before bedtime. 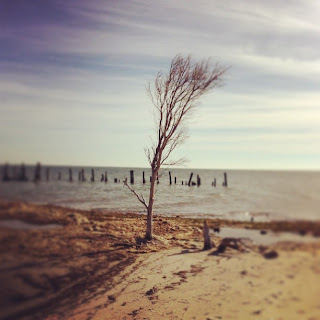 Where there is ruin, there is hope for a treasure.
~ Rumi
Posted by Jamie at 9:10 AM 1 comment: 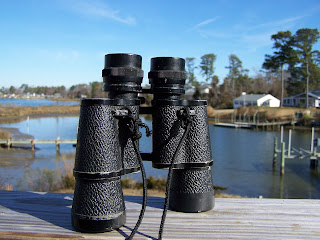 These binoculars have been in our place in Deltaville for as long as I can remember.
That would be about 30+ years.
My guess is that they were there long before that.
They belonged to my grandfather, and they always had a prominent place on one of the tables
by the window in the old trailer.
Or the kitchen table in the new house.
They are great for checking out how rough the river is or trying to identify a bird or animal
or movement in the water,
and they're even handy for seeing what people are doing.
Not that I would ever use them to spy on people,
but you can see clearly across the creek and also down to the community pier.
Not that I have first hand knowledge of this. 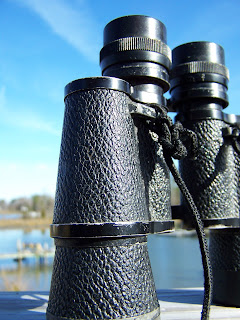 I used them just this past weekend to see who was walking out on one of the neighbor's pier
identify some ducks.
It reminded me of my grandmother and how she liked to
see what all the neighbors were up to
watch the wildlife.
And it reminded me of all those times growing up where my cousin and I would
fight over who got to use them first.
We would have to sneak them out of the house if we wanted to take them anywhere.
Allowing them to cross the threshold was clearly verbotten.
We did it anyway.
Now I realize that had a lot to do with them being my grandfather's
and my grandmother not wanting to lose something of his after he passed.
There's a lot of memories in those old binoculars.
In many ways I imagine you could claim that they let you look back in time.
Posted by Jamie at 7:56 AM 2 comments: 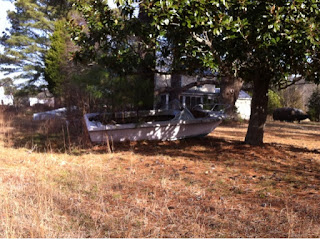 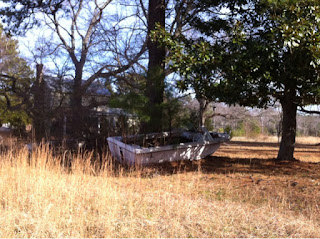 I pass this boat each time I go to Aaron's Beach.
Not only is it dry docked, it's also rooted into place by at least 3 pines growing in it.
Totally landlocked.


Don't underestimate the value of Doing Nothing, of just going along,
listening to all the things you can't hear,
and not bothering.
~Pooh's Little Instruction Book
Posted by Jamie at 8:26 AM 1 comment: 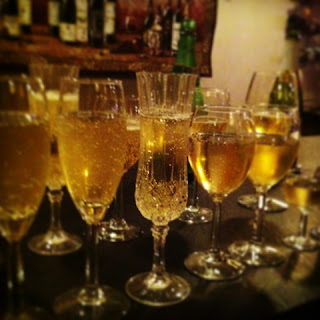 It's that time again.
That time where you look back over the past year
and come up with things you want to improve on for the next year.
Most of these things are forgotten by mid-February.
Despite that bleak outlook on actually sticking with these resolutions,
here is my list of things.
I could continue, but I think anything else would be closely tied to the first 5.
If I work on the first 5, everything else will work more smoothly
(sounds good in theory).

So here's to the possibilities of 2013.
What are your resolutions?