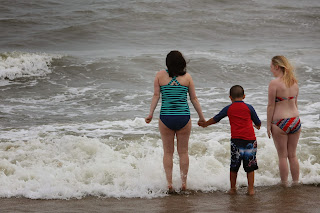 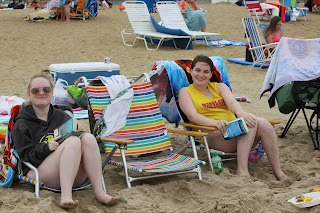 Yes, that's a sweatshirt Lizard's wearing.
Funny, I want to look at photos from vacation because it's so cold here
and the day these were taken it was unseasonably cold at the beach. 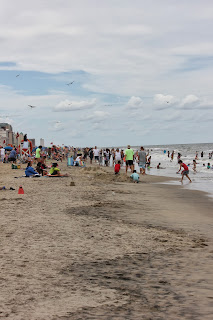 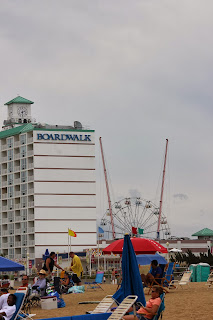 I guess because it was overcast and chilly,
the beach wasn't as crowded as usual. 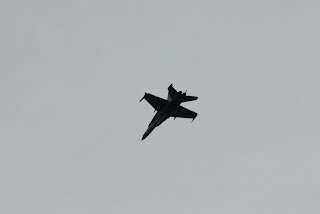 The skies were busy though.
The Brat Child thought it was awesome that we were in the direct flight path
of the Naval base.
He said it was just like being in a battle. 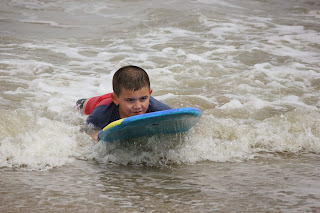 The chilly temps didn't stop the Brat Child
from learning how to boogie board. 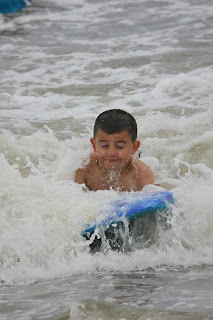 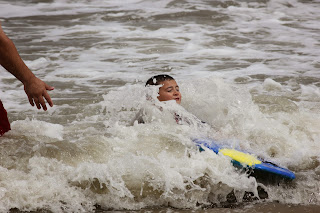 It was a good day.
It didn't take long to get there
at all.
Next time I'd like a little more time for shopping. 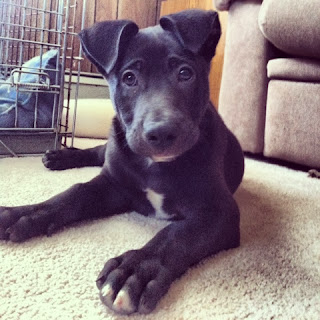 Meet Jake.
He's our new baby.
And as it seems to be with most babies,
he wasn't planned.
One evening as Big E and I left my house,
we saw what we first thought was a cat
dart across the road in front of a car.
As we continued by,
we both realized it was a puppy.
Yelling for him to stop the car,
I jumped out.
The puppy came right to me
and I scooped him up and took him into the car.
We called local shelters and SPCA's
but an ad in the local paper
posted things on Facebook
and checked Craigslist in 3 different cities.
No one was looking for this dog.
The road I live on is a rural dirt road without a lot of houses
and this puppy wouldn't be the first one to be be left on the road to fend for himself.
Because he was so young and no one at all was looking for him,
it was my opinion and that of the shelters and SPCA
that this was indeed a dump.
Seriously, people, if you have an animal you don't want
or can't keep
take it to a shelter or give it away via classifieds or Craigslist.
Don't just leave them in the cold on the side of the road.
This puppy nearly got run over
because someone didn't want to drive 15 minutes away
and take him to the shelter. 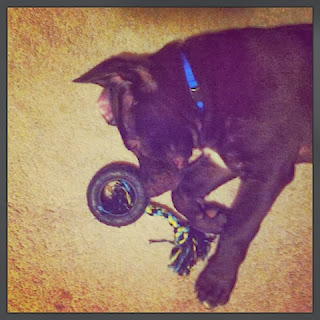 And so,
after 2 weeks of seeing if an owner would appear
Jake is home.
In our home.
He's actually really good.
Has the concept of house training down
and has only had a handful of accidents- mostly due to human error.
And he already learned "sit" 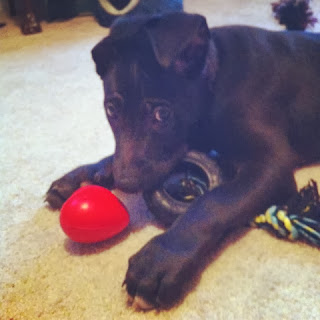 He tries to fit all the toys in his mouth.
So far he has managed the tire rope toy and the tennis ball
at the same time. 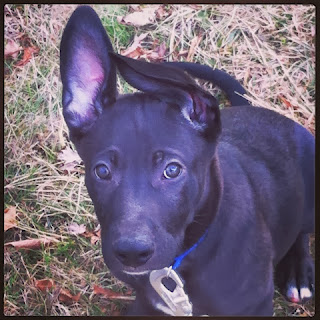 And his ears crack me up. 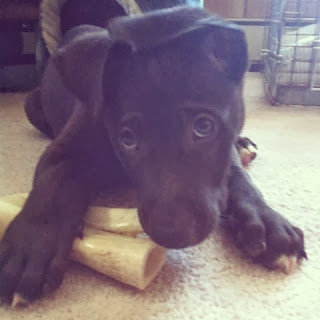 He's named after the Pirates of the Mississippi song "Feed Jake"
(You know, "If I die before I wake feed Jake...)
Seriously, feed him because he acts like he's starving 90% of the time.

I read an article on 20 Unusual Uses of Vodka.
The insteresting part was this:
"Jelly Fish Bite Soother
Much like vodka helps to treat poison ivy on the skin,
the liquid also helps to alleviate the pain and itch that come post nasty jelly fish bite.
Bring along a 1:1 mixture of vodka and water in a spray bottle
to the beach just in case of an attack." 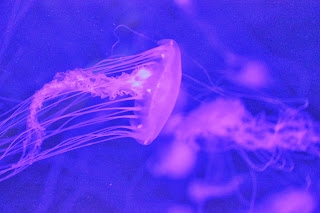 There's a few things I'd like to point out.
1. I've never seen a jelly fish with teeth and never received a "bite" from one.
If I ever saw one with teeth I would probably crap my pants and pass out
because I imagine one would look like a massive Kraken with stinging tenticles
and a beak like mouth. 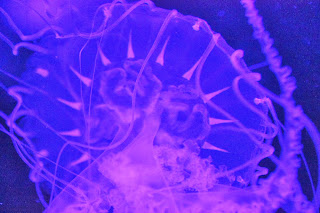 2. I've never witnessed a jellyfish "attack". I've never known them to actually be capable
of going after a specific person or thing. Plus, what would you call a movie
about a jellyfish attack? Jellyfish doesn't really strike fear.
Neither does Stinging Nettle.
Jaws is taken. 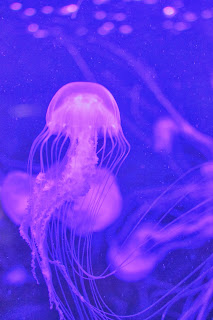 3. Watering down vodka to spray on your skin after being viciously attacked and
chewed upon by a jellyfish seems a waste of perfectly good vodka.
I'd suggest drinking it.


For a way to soothe Jellyfish stings without wasting perfectly good liquor
or peeing on your leg (I'm not making this up),
go read about meat tenderizer.
Or check out this preventative option.

*A group of jellyfish is called a smack.  I guess we have the name of our movie
Posted by Jamie at 8:32 AM 3 comments:

The Starving Time at Jamestown during the winter of 1609-10
beginning after the departure of Captain John Smith.
During that time,
the people of Jamestown was forced to eat rats and snakes
because they could not venture outside of the fort's walls
for fear of being attacked by Powhatan's tribes.
There were written accounts
that indicated the settlers had resorted to cannibalism
but no concrete evidence had ever been found.
Until Jane. 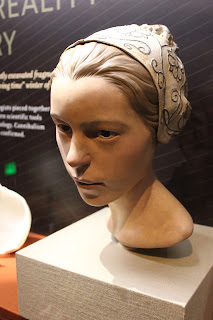 Jane was a 14 year old girl
who died during the Starving Time.
Above is a rendering of her likeness based on her skull. 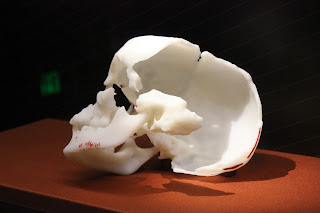 Also based on her skull
(a copy seen above)
were the indications of tool marks
(in red)
which proved that
those at Jamestown
had no choice but to cannibalize
the dead to survive.
During a trip to the Smithsonian,
I showed the Brat Child the exhibit
and explained it all.
Later that summer while vacationing,
I asked the Brat Child if he would like to go to Jamestown.
His reply:
"Do they still EAT people??!"

In 1607,
it was reported that someone was killed
during an attack by Powhatan's tribe.
His grave was found during the archaeological dig. 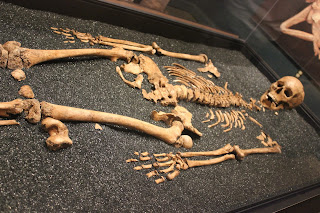 The arrow point was resting next to his leg
and would have been lodged into the surrounding tissue
during burial.
He had a broken collarbone
and his grave was hastily dug
and most likely one of the first
if not the first death. 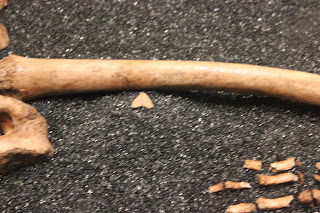 Because the skeleton also provided evidence
of a broken abcessed tooth,
it's unknown if the arrow or infection or
a combination of the two
were the cause of death. 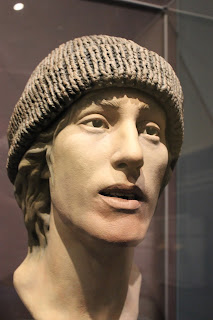 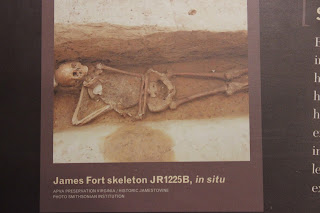 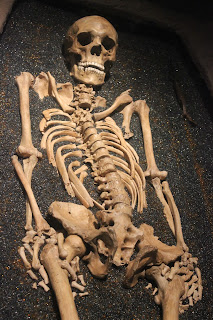 Meet Captain Bartholomew Gosnold.
Or, more specifically,
his skeleton
or what the Smithsonian strongly believes
is his skeleton. 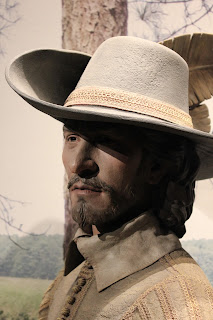 Here is a likeness of the Captain.
His remains were found during the
archeological dig at Jamestown.
Captain Gosnold was said to be one of the biggest influences
in England's colonization of America.
He explored New England and is said to have named
Cape Cod and Martha's Vineyard
(I read somewhere he had a daughter named Martha
and named Martha's Vineyard for her).

Sadly, Gosnold died only 3 months after landing at Jamestown
after succumbing to a 3 week illness.

Jamestown, VA was the first permanent English settlements in the Americas.
In December of 1606, 104 settlers sailed from London
to find a water route to the Orient, settle Virginia and find gold.
From the moment they stepped off the shipped,
the settlers came under attack by the Algonquin Indians in the area.
The Algonquins were a constant on-again-off-again enemy.
Captain John Smith was able to set up trade with the Algonquins
but with Smith's departure back to England,
the period known as "The Starving Time" came about.
Many people died from starvation and disease
and there was a period of warfare between the colonists and the natives. 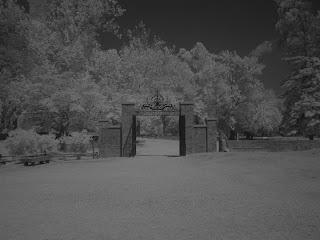 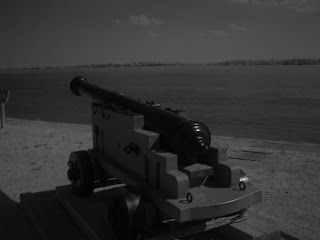 Eventually more colonists arrived at Jamestown
under a second charter by the king (James I)
that allowed for stronger leadership.
Settlers attempted several different types of industries
before John Rolfe introduced tobacco farming
which proved to be profitable.
John Rolfe ended up marrying Pocahontas, the chief's daughter.
I've made many trips to Jamestown,
and I highly recommend a visit if you're in the area.
(photos with the exception of the one at the top of the page were taken with
and IR filter- yes, I was looking for ghosts.) 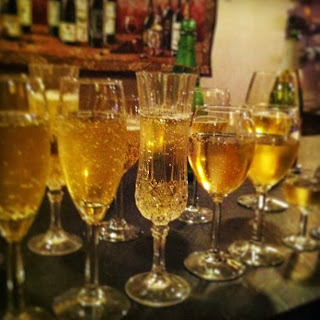 It's that time of year when people write out lists of things they want to change in the coming new year.
I'd wager that most people start out with good intentions and
plan on following through with all of their resolutions.
Sadly, most give up and fail to accomplish anything on their list.
Despite the fact that I fall into the never-accomplish-anything-on-my-resolution-list category,
I figured I'd give it another go.
So, thinking that sharing my list might make me more inclined to stick to it
(the whole accountability thing),
I'm posting it here.

That for the most part is my list.
My goals and resolutions for 2014.
Throughout the year I'll check back regarding my list to see
how I'm doing or
if I'm doing.

Be at War with your Vices,
at Peace with your Neighbours,
and let every New-Year find you a better Man.
~Quoted in Benjamin Franklin's 1755 Poor Richard's Almanac, December
Posted by Jamie at 9:27 AM No comments: