So, I failed my photo challenge.
Miserably.
There was just no way I could keep up with the frantic rush of the Christmas season,
the multiple illnesses the Brat Child had,
my own health issues,
the dog's ongoing mystery illness,
the cat's UTI,
normal life and all its demands,
taking specific photos
and blogging.


So, here are the photos I did take: 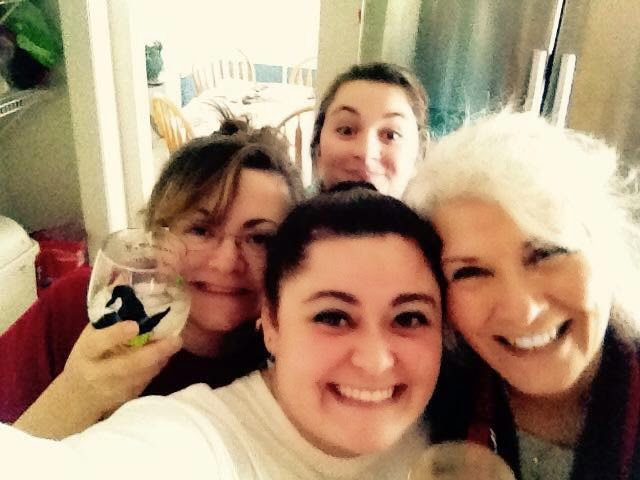 Ok, so I didn't take this, my sister did
(that's her front and center with me to the left,
my mom to the right and my daughter in the back),
and it was taken on Thanksgiving,
but it was going to be my photo for "Family". 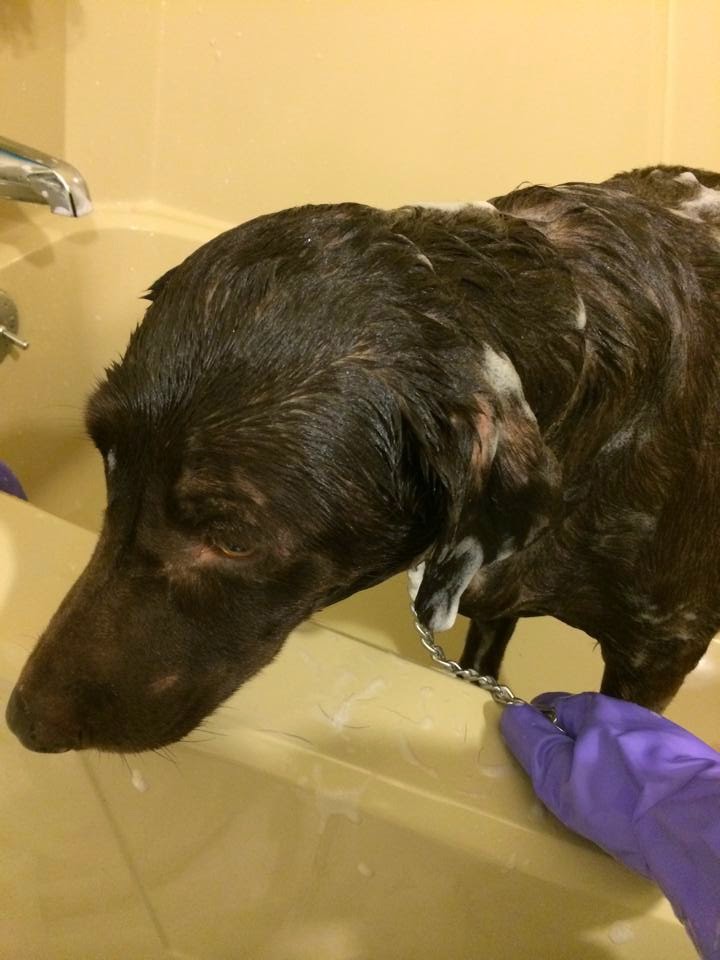 This is Bailey getting one of her regular baths with medicated shampoo.
Since August, Bailey has had a mysterious skin issue where she looses her hair
and scratches until she has open sores which then develop into skin infections.
We are on possible diagnosis #3: food allergy.
I now get her meds at the Pharmacy-
the name reads "Bailey J. dog of Jamie" 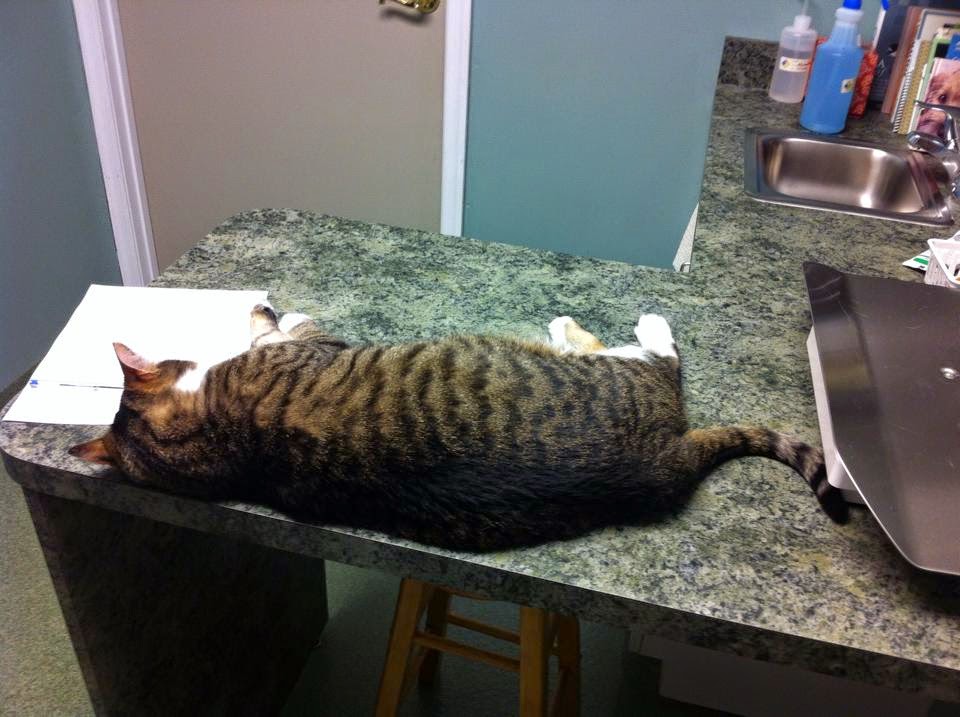 This is Gibbs the cat.
Here he is shown playing dead
waiting for an unsuspecting Vet Tech to enter the room
so he can attack them.
Seriously.
He went from love bug to rabid jaguar in 6 seconds.
After attacking the tech and me,
he prowled the room continuously
hissing and growling and swiping at whatever got in his way.
He had a UTI, easy enough to fix with pills.
Ever try to give a rabid jaguar pills? 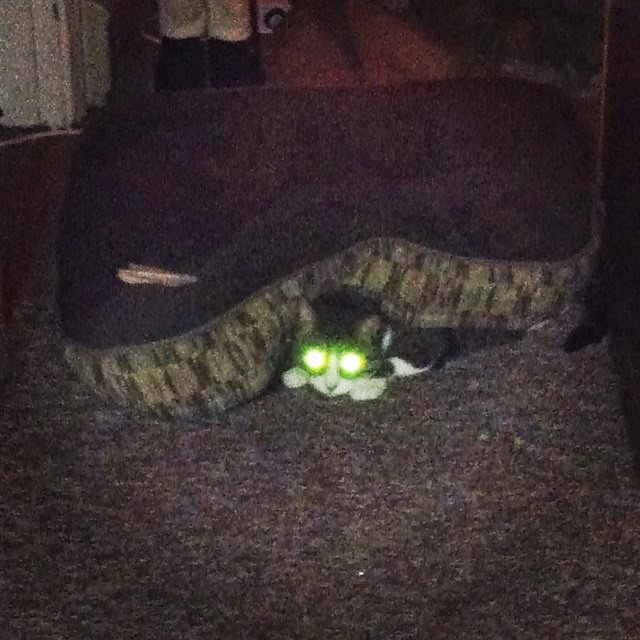 This is Gibbs hiding from getting his pills.
He learned to keep the pills in the side of his mouth
so I thought they had been swallowed,
then he's spit them out in the hallway.
Now I crush them up and mix them with canned food.
So far he doesn't suspect. 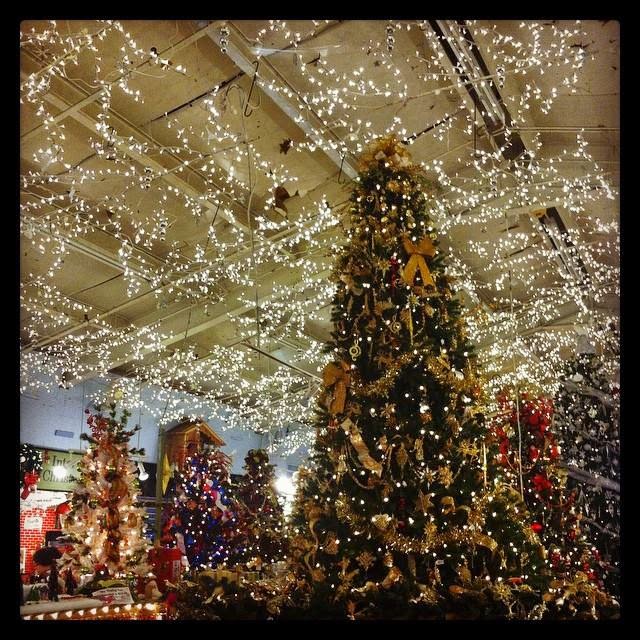 A photo from Valley View Farms in Baltimore.
It has every ornament imaginable
even some you can't imagine. 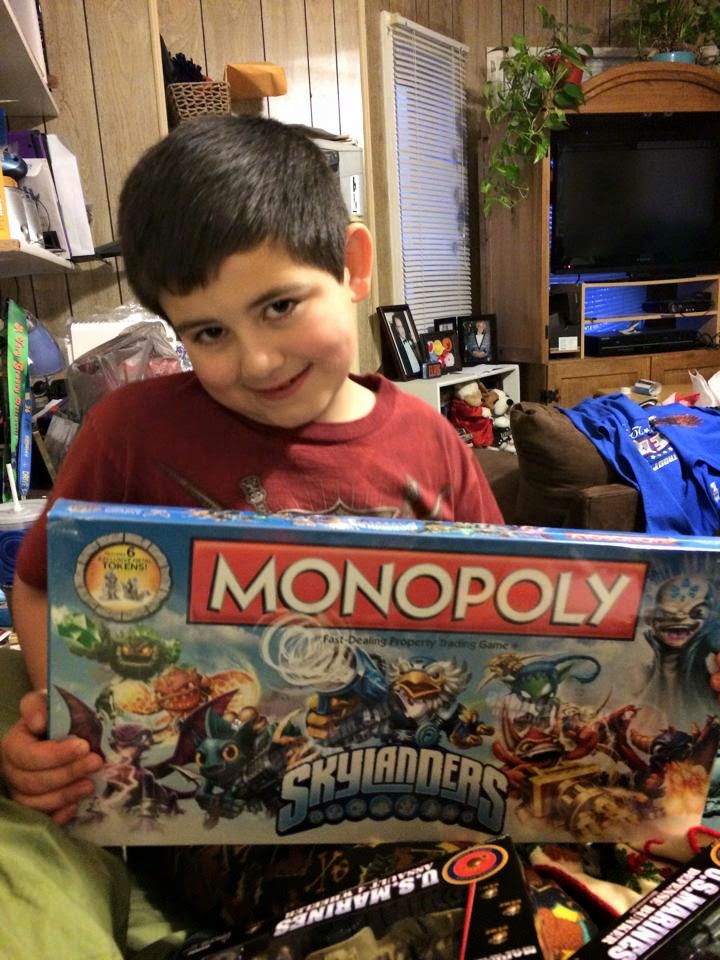 Christmas Day and the Brat Child with one of his favorite gifts. 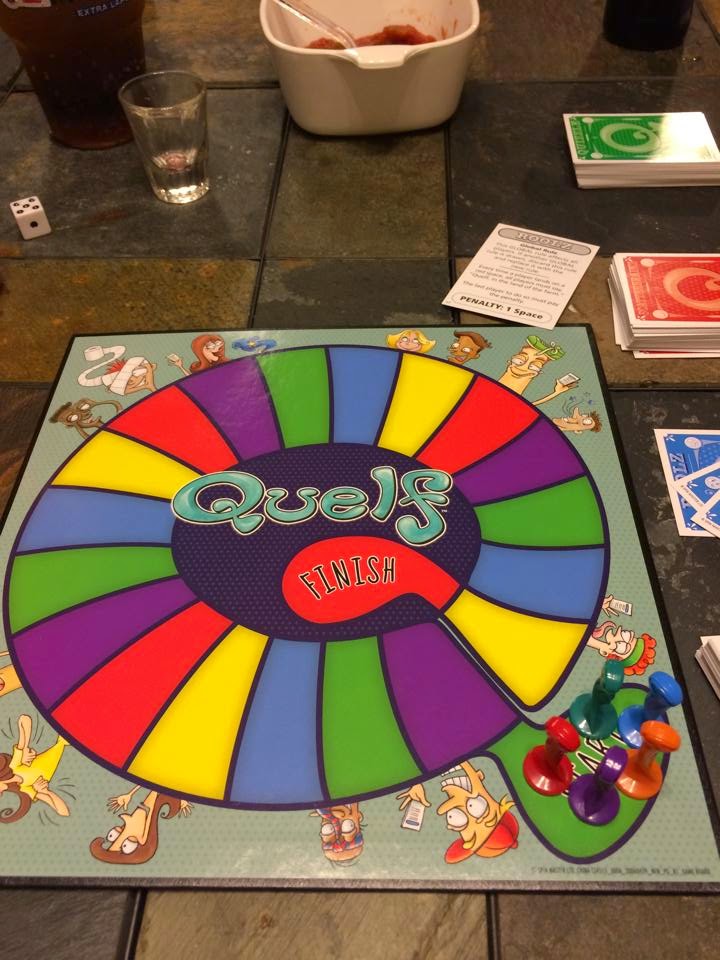 A shot of one of my favorite gifts- the game Quelf.
If you want a night full of hysterical laughing,
play this game.

So those are the photos I managed to snap this month.
Will I manage to do the January Challenge?
Who knows.
I'll make an effort, but I'm not going to make it seem like a chore
or worry about getting it done. 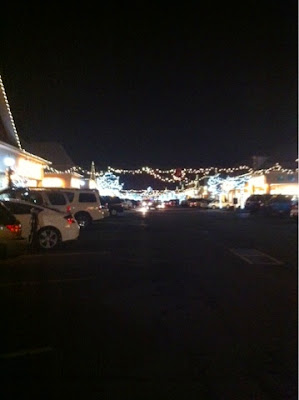 #6 Shopping-
not that I got much accomplished
since I had both Big E and the Brat child with me.
Neither one is keen on shopping. 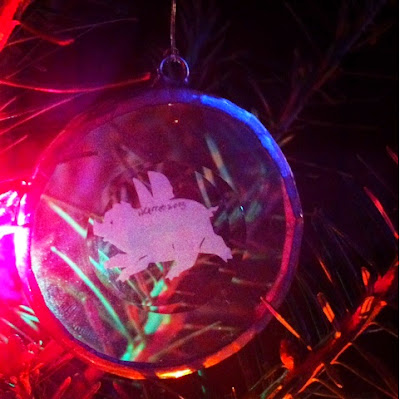 #8 Ornament-
This is my flying pig ornament.
The pig is actually an example of Scherenschnitte
which in German literally translates to "scissors cut".
It's the art of cutting paper into decorative designs. 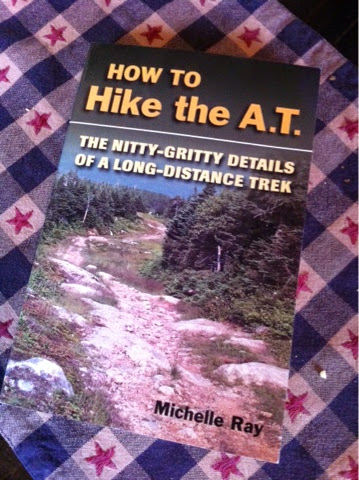 #9 Something You're Reading-
Picked this up at REI (my new favorite store)
in order to learn some things for the big hike in October. 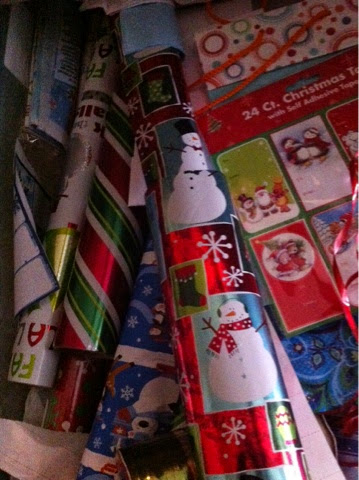 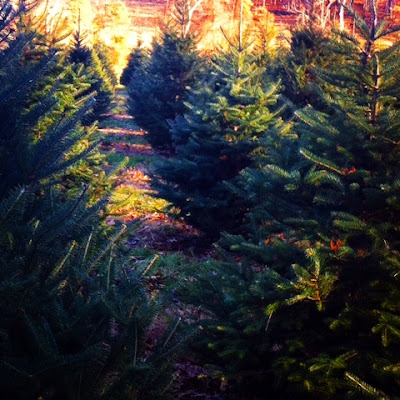 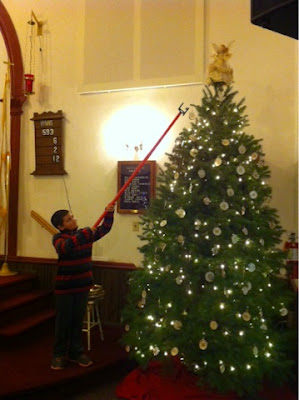 #12 A Beautiful Sight
Our church Christmas tree-
not only is it beautiful, but so are the handstitched Chrismons
and the fact that the Brat Child was so thrilled to help in the decorating.

I'm a slacker, I know, but things get hectic and time disappears and suddenly
it's Sunday night and you're laying in bed and you realize
that you never blogged the photos on Friday like you intended.
You also realize you forgot to do something with the Elf on the Shelf-
who is really the Elf on the Top of the Refrigerator
because that's where you toss him after each day's shenanigans.
But despite this, you stay in bed and channel Scarlett O'Hara
and decide to worry about it tomorrow.
So, here are the first 5 photos,
and I promise I'll get back on my designated schedule
(like there's anyone out there reading this and disappointed I didn't blog on Friday) 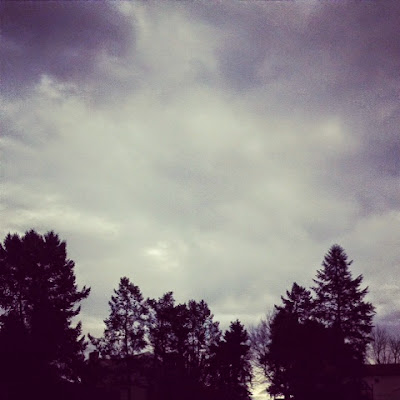 Day 1: My View
(outside my office) 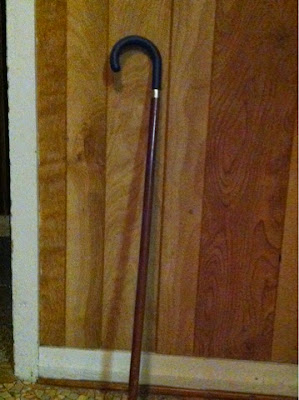 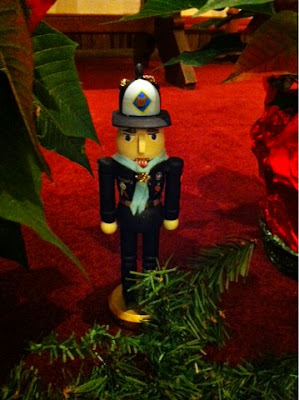 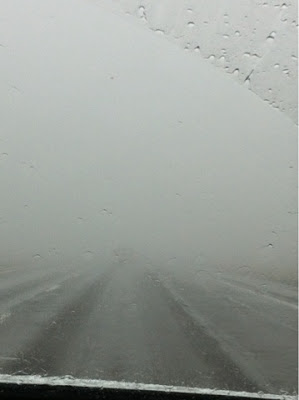 Day 5: Today's Temperature
(It's really just rain and extreme fog but looks as cold as it was)
Posted by Jamie at 7:40 AM 1 comment:

I posted this today over on my other blog.
I thought it couldn't hurt to do the same here on this blog
and see what happens.
With the holidays breathing down my neck and snapping at my ankles nearly upon us,
free time is nonexistent and stress in over abundance
both of which make blogging
or having any kind of coherent thought nearly impossible.
So I'm going to attempt this photo a day challenge: 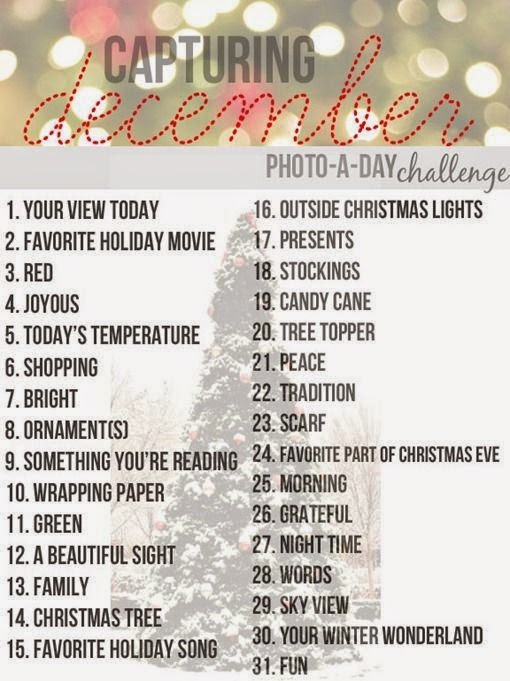 Every Friday will be "Photo Friday" and I'll post the photos from the week.
I'm hoping I can get Big E and the Brat Child to take photos too,
and if anyone wants to join along and share, email me your pics and I'll post them on Fridays.
Let's try to make this month about fun things and enjoying the season
instead of screaming and ripping our hair out
stressing.
Posted by Jamie at 8:22 AM No comments: