A Lesson in Manners

Many adults complain about the lack of manners in today's youth.  Interesting that today, one adult got a lesson from none other than my darling Brat Child- the absolute last person I would expect to school someone in politeness.

Today I ventured out to the local grocery store to get snack items for today's big game (that would be the Ravens vs Squeelers matchup in NFL playoffs).  Brat Child was hell bent on getting donuts- "BIG donuts not the wittle ones in the bag but the chockit covered ones with no stuff innit just the plain insides and chockit frosting."  So while I was off getting my French Onion dip for my chips, I sent Big Sis off with the Brat Child to get the donuts.  The following story was told to me by Big Sis...

There was this woman taking forever to pick out her donuts and there was only one chocolate covered donut left.  I kept tell BC that I would get him that last donut just so the woman knew not to take it.  She finally gets out of the way and I go to to get BC's donut and this other woman practically pushes me out of the way and BC says, "Excuse ME Wady!" The woman just looks at him but she backs up and I get the donut.  Then BC picks a chocolate frosted donut shaped like a football and there's one left so I go to get it and the woman gets huffy because she wanted it.  She tries to push me out of the way again so BC stands right in front of both doors at the donut display and spreads his arms out and his legs and stands there in front of the specialty donuts saying, "hmmm which one I want?"

At the end of her story Big Sis says, "I swear, Mom, he's just like you.  But that lady deserved it" 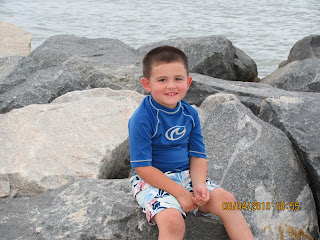 What I Got Right This Week

Dealing with the current stressful issues of my already stressful life, I tried to think of a way that I could possibly try to maintain as much positive thought as possible.  Therefore, every Friday I will be trying to list at least one thing I've been able to accomplish during the week that has been good.  So... this is what I got right this week:

* Managed to do THE ENTIRE mountain of laundry AND PUT IT ALL AWAY.

* I scanned in a boatload of old photos I've been meaning to scan into the
computer.

* I managed to take the Brat Child to story time at the library.

* I finally paid the $21.00 overdue book fine at the library which then allowed me
to check out copious amounts of written material that will more than likely earn
me another $20 something fine because I just have issues remembering.
I see it as contributing to the library's coffers.  Just doing my part.

* I haven't killed anyone yet.


What have you accomplished this week? 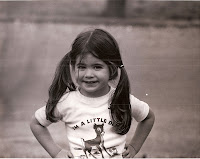 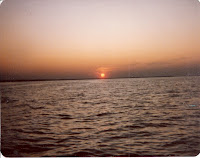 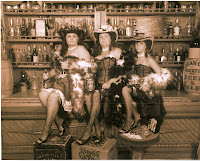 Some of the photos I managed to scan﻿ 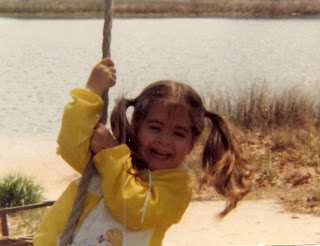 So was I once myself a swinger of birches.
And so I dream of going back to be.
It's when I'm weary of considerations,
And life is too much like a pathless wood
Where your face burns and tickles with the cobwebs

Broken across it, and one eye is weeping
From a twig's having lashed across it open.
I'd like to get away from earth awhile
And then come back to it and begin over.
May no fate wilfully misunderstand me
And half grant what I wish and snatch me away
Not to return. Earth's the right place for love:
I don't know where it's likely to go better.
~Robert Frost excerpt from Birches

Down the road from our house in Deltaville is the boat ramp and pier for the community.  When I was a kid, there was a rope swing tied to a large branch on the oak tree that stood by the pier.  There was a yellow plastic disc seat- one that was made specifically to provide a seat for a rope swing.  I remember sitting on it, swinging high over the sand and gravel.  I used to think about going high enough to jump off and make it into the water which was not a possibility.  More likely I land on the concrete of the boat ramp and break something or, heaven forbid, crack my head open (which was the concern my grandmother always voiced: "you're lucky you didn't crack your head open!" "Get down from the roof before you fall and crack your head open!" "What are you doing climbing out of the window? Do you want to fall and crack your head open?") 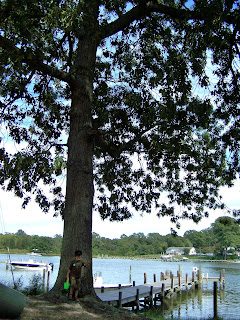 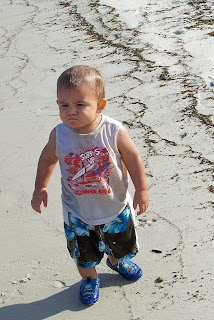 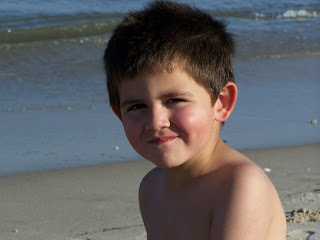 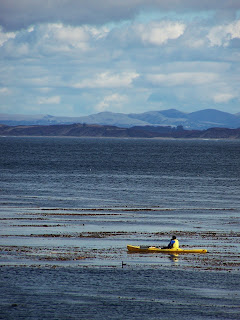 Late, by myself, in the boat of myself,
no light and no land anywhere,
cloudcover thick.  I try to stay
just above the surface, yet I'm already under
and living within the ocean.
~Rumi 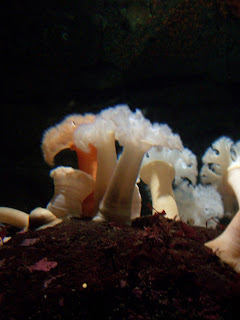 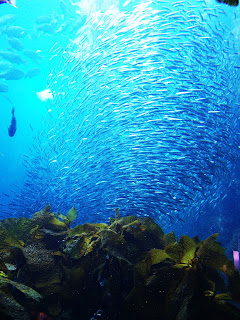 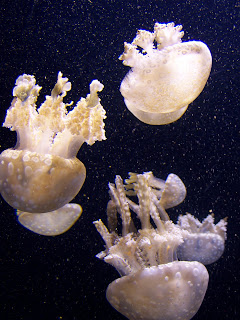 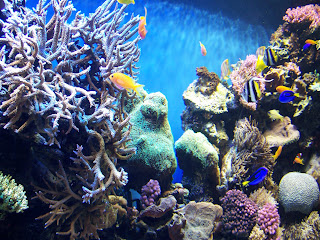 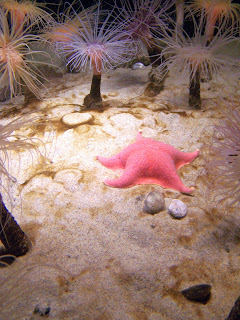 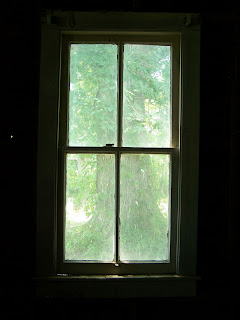 One of the things I remember from my high school English class is the lesson on film iconography.  Basically, it's a lesson in symbols and what they signify.  Someone walking up a flight of stairs signifies a change, someone standing in a doorway signifies a transition and viewing something through a window shows limited access to whatever is on the other side.
I consciously thought about the symbolism when I took this shot this summer.  I liked how the inside of the house was so dark and the outside so bright in contrast.  A lot like how I feel most days: limited, trapped and utterly miserable.  We won't even touch upon the stress or the inevitable gorging of whatever candy bar I can find.  But despite that, part of me knows there is a light at the end of the tunnel, or on the other side of the glass.  Eventually I'll come out on the other side and things will hopefully be brighter and easier and certainly happier.
In the meantime, someone pass the bottle of wine, and while you're at it, grab a big rock.
Posted by Jamie at 10:19 AM 3 comments:

I realize that this story has absolutely nothing to do with Deltaville, but I think it is amusing so I thought I'd share. 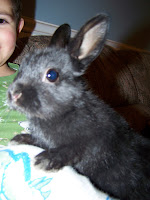 ﻿Christmas 2009, The Brat Child received this adorable black bunny for Christmas.  The Brat Child, being an avid fan of Spiderman and all his counterparts, named the new addition Venom (for those of you who are not avid fans of Spiderman, Venom is the villain who looks like a black Spiderman).  The Brat Child loved his new friend.  Venom liked to hop around the couch, climbing all over anyone who was sitting there and even playing "games" like jump-on-the-head-of-the-unsuspecting-human-and-run-away.  We all loved Venom.  We liked him so much, I lost hold of my senses was convinced Venom would be happier with a friend, and in the end came home with not A friend but TWO friends.

We played with out bunnies and all was right in the world.  Sadly in late spring tragedy struck.  We lost all three of our bunnies to what we believe was bad food (I'll spare the discussion of a certain fungus).  I wasn't sure how to handle telling the Brat Child.  My mom suggested I not mention anything right away and when I had to, tell him they all ran away.

The Brat Child, Big Sis and I are in the grocery store shopping for items for the Brat Child's 4th birthday party.  While in the produce section, BC starts filling the cart with carrots.  I tell him I don't need any and he says, "Venom do.  Venom told me he needs carrots."  So here I was faced with the dilemma of telling the poor child his bunny ran away on the day of his birthday party. Wonderful.
Me: Honey, Venom and the other bunnies ran away
BC: No him didn't
Me: Yes, he did
BC:
Me: I can't find him.
BC:
Me: Honey, bunnies don't come when they are called, you can't find him like that.
BC: Yes you can! Him know his name!

At this point, people are staring and Big Sis and I are near tears ourselves at the sight of BC in the throes of despair.

So we get to the car and I start thinking.  I decide to contact the pet store where Venom came from.  Of course, he came from a pet store an hour away because BC asked for a black bunny and it was the only store that had one at the time.  I get the number for the store and call.

Me: Yes, I was wondering if you have any black bunnies?
Sales Girl: Let me check. Yes, we have 2.
Me: Fabulous! Is there any way you can hold one for me? I'm driving there RIGHT NOW but it will take me an hour to get there.
Girl: We don't typically do holds on animals.
Me: I understand but here's the deal.  My 4 year old son's bunny RAN AWAY and you just called me and told me you FOUND HIS BUNNY. And it's my son's birthday today.
Girl: Hold on one second for me.
Manager: Ma'am?
Me: Yes?
Manager: We can't technically hold the bunny for you, but under the circumstances, I will tell the staff to deter anyone from buying the black bunnies.
Me; Bless You!

So we high tailed it to the pet store.  I left BC in the car with Big Sis while I went in to make my purchase.  I knew BC would be too smart to allow him to see money change hands, plus I was unsure what would happen.  I walked in and was escorted to the bunnies to discover that these bunnies were lionhead/dwarf mix bunnies.  That means they have long hair around their head.  Venom didn't have ANY long hair.  Great.  So I picked the one that had the least amount of hair and took him outside all the while muttering about how I was going to explain the extra hair.

Once outside, I presented "Venom" to BC who cried from happiness at having his bunny back.
BC: Mom, why do him have hair?
Me: Well, he was gone so long he grew a beard.
BC: Venom! You all growed up with a beard!
(at this point I am thanking whatever powers that be that my son felt that rabbits growing beards was perfectly normal and reasonable)
BC: Mom, why him have this white on him feet? 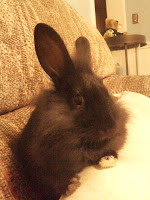 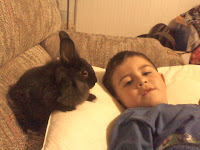 The New Venom hanging with Ethan

Me: (just noticing the tiny white tips on the paws) Well, that's from his spiderwebs.
BC: Venom has spiderwebs! All Right!

Since that time, BC has concocted an elaborate story on how Venom ran away and how he managed to run away clear over a mountain.  It's quite simple really- he drove a tractor.  Venom has somewhat of a star status around these parts.  He's made several appearances at daycare where the kids ask me exactly how Venom managed to drive the tractor when he can't reach the pedals.  I simply say nothing and let all the kids reason it out.  They usually come up with some idea that satisfies their questions.

Me, I'm just glad it all worked out, and I hope that we don't have any more episodes of runaway bunnies. 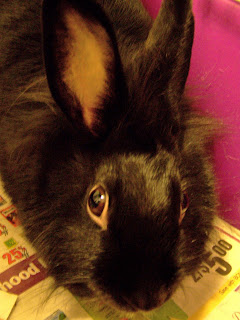